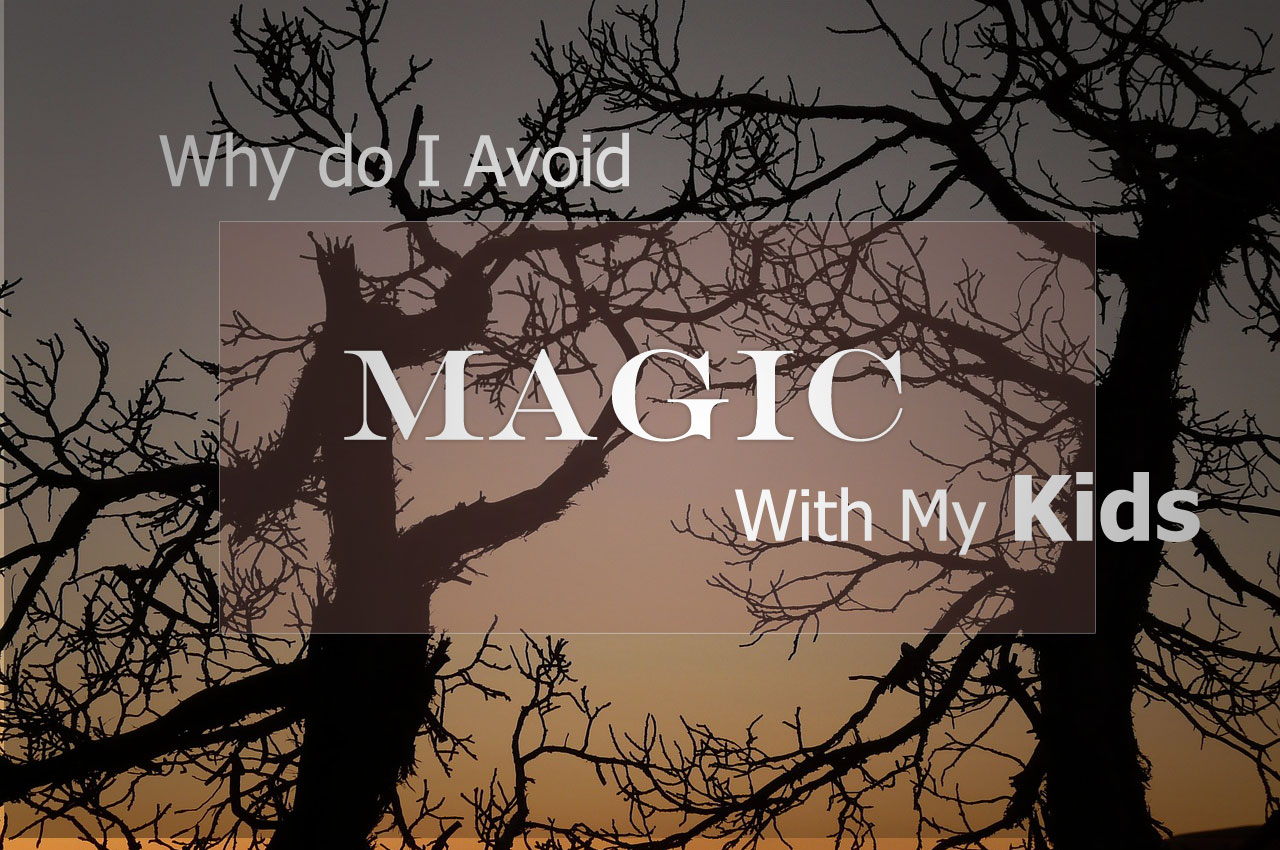 I flip through the television channels as magic and sorcery is strewn through cartoons and prime time TV masquerading itself with innocence and enchantment; blurring lines with childlike imagination and deep spiritual darkness. The thought that these could go hand in hand is weird, yet they almost seamlessly do. As though it’s a game of ring around the rosies. On main stream television it is almost impossible to find something without magic. Then the pick and choose battle begins, or as some parents I respect do, go without TV. Wondering what will cause the greatest impact?

There are two equal and opposite errors into which our race can fall about the devils. One is to disbelieve in their existence. The other is to believe, and to feel an unhealthy interest in them. They themselves are equally pleased by both errors and hail a materialist or a magician with the same delight.

Why Do I Avoid Magic with my Kids

God Warns Against It

In itself magic almost seems as imaginary as the Easter bunny or Santa Clause, and yet the ever growing population who is lured in by this supernatural realm feel otherwise. The scary realization that you can be entertaining something dark without even realizing it is strikingly eerie. The Bible warns us to avoid magic, witchcraft, spiritists, fortunetellers etc. So why do many still entertain it? As with most things that are through media outlets, it’s not that my kids are participating in “magic”, but I don’t see the benefit of letting them watch or be a part of something the Bible warns against.

I will also turn against those who commit spiritual prostitution by putting their trust in mediums or in those who consult the spirits of the dead. I will cut them off from the community.

When talking about spiritual realms like magic, angels, and demons it almost goes past many peoples level of comfort. It is hard enough being able to rationalize things that we see with our own two eyes. Yet I have not been disappointed in anything I have trusted and obeyed God with in the Bible.

The nations you are about to displace consult sorcerers and fortune-tellers, but the LORD your God forbids you to do such things.”

Even today their remains the presence of witches, witchcraft, fortune tellers, and so on. Some claim to not carry the stereotypical persona of a witch, by not claiming Satan as their source of power, and trying to do “good” spells. However, magic is not to be trifled with. If God warns against it, who do you think it is granting them supernatural power?

Manasseh also sacrificed his own son in the fire. He practiced sorcery and divination, and he consulted with mediums and psychics. He did much that was evil in the LORD’s sight, arousing his anger.

Even as I write, I feel the hokey pokey stares. It almost seems nuts that their could be such a sect that actually performs these things, yet it’s true. Many may also discredit miracles and claim there is a rational reason behind them apart from the supernatural, yet I have seen miracles. My grandfather was in the ICU, after the doctors examined him they encouraged my family to take him off life support reporting his lack of brain activity. We didn’t follow through with this request, and he eventually came home from the ICU and lived another year with full brain function.

All my kids are 5 and under, so I have chosen to try to eliminate gray areas at this juncture. In regards to magic I try to avoid sorcery, witches, fortunetellers, or shows that highlight these supernatural activities. Even worse is when they are portrayed with a stroke of innocence. I feel that is one of the most deceptive things to portray something that is unacceptable to God with the alluring qualities that make us question if they are evil.

Although magic in children’s shows seems innocent, encouraging the values we desire to set in our kids is always the way to go. Just like I wouldn’t want my kids to watch a show with a lot of swearing or immorality, magic falls in that same category. I don’t have all the answers. My thoughts on magic are no exception, but it is a topic I would encourage you to seek out what you truly believe and why, to protect yourself and your kids from opening up their mind to something that really shouldn’t be entertained.