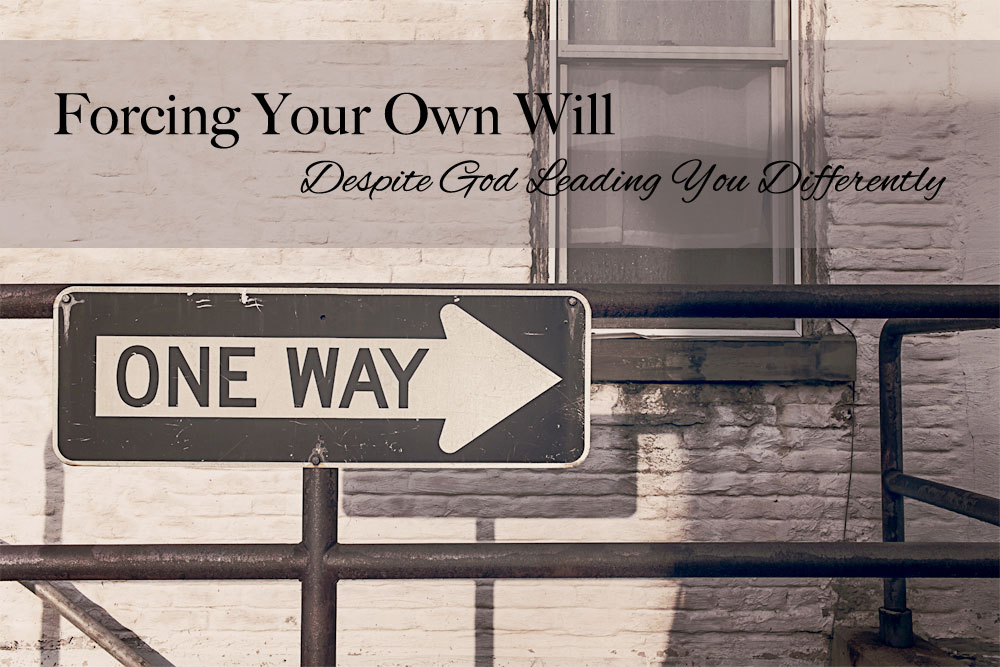 Whether consciously or subconsciously thoughts are constantly filtering in and out of our heads, as we establish game plans for our days, weeks, and months, but how often does it go as smoothly as hoped, or exactly as we originally desired?  Sometimes we can become so focused on what we think should happen, we ignore God directing us down a different path.

I was watching my daughter’s dance recital a few months back and about ¾ of the way through the performance my camera’s memory was full. Instead of putting the camera to the side, I tried feverishly to delete some unnecessary photos in an attempt to capture some extra moments of film. However, in my distracted state, I missed part of the performance. When the recital ended, I felt horrible! I hadn’t deleted enough memory, nor did I visually see that part of the performance.

Our way or the highway

Sometimes we won’t take no for an answer. We are confident our “solution” is the best way, and we want to prove that we are right. Yet are we? What are we going to miss out on if we force our own way? God wants the best for us, but we need to trust Him, not run from Him.

Sometimes God allows us to make choices that are contrary to what He desires for us, not because He agrees with the decision or doesn’t have control, but because of free will. We have the choice to love Him or not to love Him. God knows the outcome and what’s best, but sometimes we still argue with Him. Why do we do that?

Even when we don’t choose God’s path for us, His love for us is still present. However, just as there are consequences when a child disobeys, we too can expect negative consequences when we try to do things God warns against. This is not out of spite. This is staying true to God’s character of love. Sin separates us from God, but love draws us to Him.

Because the LORD disciplines those he loves, as a father the son he delights in.

Israel sought after a king despite God’s warning

In 1 Samuel, Israel felt a king would be the answer to their problems. Yet, God saw the bigger picture, and warned them of the consequences. Still the “we know better” philosophy came out, and they pursued a king despite God’s warnings.

But when they said, “Give us a king to lead us,” this displeased Samuel; so he prayed to the Lord. And the Lord told him: “Listen to all that the people are saying to you; it is not you they have rejected, but they have rejected Me as their king.

In the following verses Samuel tells the people what God warned would happen when they appointed a king.

Israel was warned they would not like these transitions and would cry out to the Lord for relief from the King they so desired, yet God would make them live with the consequences.

Wait, can you repeat that?

Even though they were going to be sorry for their actions, God would make them live with the consequences. So often when we make a mistake we assume because God has forgiven us that the effects of our actions should also be erased, but this is not always the case.

When that day comes, you will cry out for relief from the king you have chosen, but the Lord will not answer you in that day.

Even with all these warnings Israel desired their own way.

But the people refused to listen to Samuel. “No!” they said. “We want a king over us.

So the Lord granted them their request.

The Lord answered, “Listen to them and give them a king.

And the cycle continues in our life. We want something; we ask God for it. He warns us of the consequences, yet we still go forward with the plan, and are baffled when negative consequences ensue? I pray we can be attuned to God’s leading, learning to trust the one who knows how many hairs are on our heads (Matthew 10:30) so that we may not have to learn everything the hard way. Can I hear an “Amen?”

Trust in the LORD with all your heart and lean not on your own understanding; in all your ways submit to him, and he will make your paths straight.