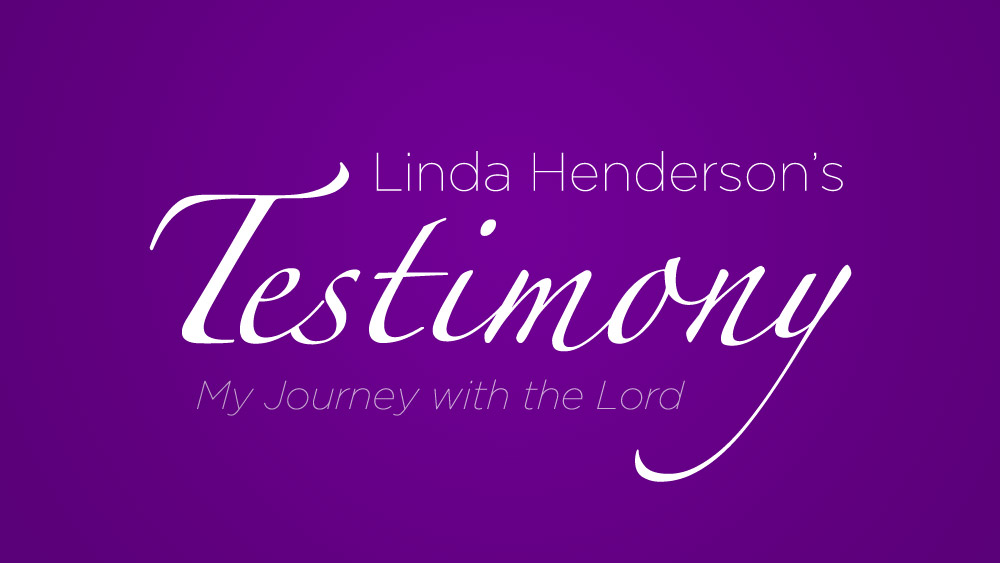 I am excited to have my Mom, Linda Henderson, guest post on Poured Out His Love, and share her personal testimony of salvation.

Back in the 1950’s I was adopted by caring immigrant parents, giving me the idyllic start to my sometimes controversial life. They provided a stable & peaceful  home filled with kindness and generosity. My Father worked hard on the farm-but he always had time to crack a joke or two, or discuss politics and other important subjects with the customers who came to buy eggs. Mom was right there by his side- either working in the barn, cooking, cleaning, or entertaining guests. My brother and I (who is about a year older than me) got along fabulously. We never really competed, since we had separate areas of interest. I loved anything to do with school and learning, and he focused his interests on automotive. My Mom was the spiritual influence in our family. She made sure we went to Sunday School and church starting at about 3 years of age (that’s as far back as my memory serves me, anyway). So from a young age, I started to believe in God, and later on I understood the great sacrifice His Son made for us on the cross. I remember at a young age, drawing a picture of a cross with a bunny rabbit and another animal looking up at it. What was being taught in church and Sunday School was really sinking in and starting to make an impact in my life. My parents were very honest, and taught us kids to be that way, too. They didn’t reinforce much discipline, but their examples were enough to keep us on the straight and narrow — for a while, anyway. They also didn’t really gossip about people, but were respected members of the community. I always tried to do my best, because I really did want to please them and make them proud, and they were proud of me when it came to my school performance.

My Moment of Salvation

Back in 1970, a Pastor friend, told my Mother, Billy Graham was going to be in town, and asked if we would like to attend the crusade. My Mom thought it would be a good idea, so she and my brother and I boarded a bus headed for Shea Stadium in New York City. When we got there, it was so completely crowded that we had to sit in a row near the top of the stadium. Not only that, but it was pouring rain, and the field in front of Billy Graham’s podium was completely saturated. After George Beverly Shea sang a beautiful consoling hymn, and Ethel Water’s sang “His Eye is on the Sparrow”, Billy gave his riveting message.

And then, as usual, came the altar call. Just before Billy invited those who wanted to accept Christ as their personal Lord & Savior to come forward, a battle began ensuing in my mind. I knew I needed to invite Christ into my life, but I was worried it would make my Mom think she hadn’t done a good enough job in raising me if I admitted I was a sinner in need of Christ. Silly, right? It was just a fiery dart of the enemy to try and stop me from getting saved. Also, since we were so far up in the bleachers, I didn’t think my Mother would let me go all the way to the front of the stadium by my self. I was only 13, and knowing my Mother, she would worry about me getting lost in the crowd. But all of a sudden, Billy Graham said whoever wanted to accept Jesus as their Savior could raise their hand, and a counselor would come to them. Praise the Lord!

After praying to invite Jesus in my heart, I felt a sense of relief, but it wasn’t until the bus-ride home that I really noticed the difference. Honestly, it felt like I was floating on a cloud, but the funny thing was, I didn’t realize anything unusual was going on, until I looked around and saw the expressions on the faces around me. Not that they looked horrified, but they obviously weren’t experiencing the same level of peace and joy that I was at that moment.

Where I am at Today

This was the beginning of a long journey filled with ups and downs, that has brought me to where I am today. God has shown me more mercy and grace than I ever thought I would have needed. Every time I’ve fallen down, He’s helped me get back up again. Believe me, when He promises never to leave us or forsake us, Jesus makes good on His word. In fact, I know His presence has been with me as He was there to give us the strength we needed to raise our seven children, who all know the Lord personally as well. Without the Lord, our family could have ended up in shambles, but because He was with us, we are all still in touch with each other, and see each other on a regular basis. God also gave me a desire to go on mission trips, and He allowed me to do this between 2010 and 2014 (after the kids were grown up). He’s also allowed me to teach Sunday School for a total of 9 1/2 years, fulfilling another desire He had given me to become a teacher so many years ago.

The same peace that first came in my life in 1970 is still present, assuring me God will be there for the rest of the journey. It’s such a joy now to have Grandchildren, and to watch as God’s plan for their lives enfolds. What ever happens in the future God will be with us!
Because God is in my life, I want to love people more and more. His love has never failed me yet, and I know we can never be separated from it when the Holy Spirit lives in our lives. He enables us to be forgiven, as well as truly forgive those we need to forgive. I’m looking forward to the day when our whole family will be together with all believers in Heaven. It’s going to be better than anything we can imagine. And we’re going there not because we deserve it, but because of what Jesus did for us. All we need to do is just receive the gift of Eternal life He has for us. It can’t be earned — just accept it and you will be rejoicing for all Eternity!

They overcame him by the blood of the Lamb and the word of their testimony.