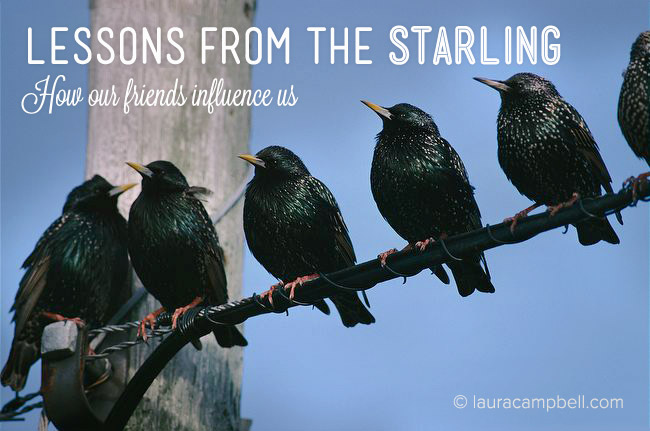 My sister-in-law and friend Joanna Henderson is guest posting on Poured out His Love today. She had wrote this piece for those who were a part of a woman’s retreat, but I thought it would also encourage others. I hope you enjoy!

After coming home from the Real Housewives Retreat, I could not stop thinking of the enormous flock of black birds that swarmed the dining hall that last meal we had together. It was enough for us all to get out of our seats and stare out the windows (nobody dared to go outside though!).

There were so many birds that we could all gaze in amazement out different windows on various sides of the hall and still all see a massive amount of birds at the same time! I just brushed it off as one of those unexplainable things and just focused on the incredible ways God spoke during the weekend. But after I got home, it kept coming back to my thoughts.

It turns out, the only bird that lives in this area and fit the description is the European Starling.

One interesting fact about the European Starling, is it’s ability to mimic other birds and noises. This is often dependent on the area that the bird is living in. For example, starlings that live in the city have been known to start chirping like a car alarm!

Living a life that pleases God

Like the starling we are strangers in this land. We do not “naturally” belong in this world, especially as wives seeking to be godly and raise godly families, we are not the norm. God has introduced us to an unnatural habitat, and with His help we can flourish, thrive and spread all over the country!

Our friendships influence our actions

We should also remember that who we spend our time with and what influences we allow in our lives greatly effects what comes out of our mouth. We need to surround ourselves with like-minded women who will build us up and encourage us in a godly way. We can’t do this life thing on our own!

We need each other. We need friends. The starling is a picture of why we need to be careful who those friends are. Are we mimicking God or the world? Do we sound like a beautiful song bird that He created us to be, or an incessant alarm with no purpose that people can’t stand to hear? Choose to fill your lives with fellow song birds!

Being a friend takes communication

I was amazed at the symbolism that goes with the starling. How important it is to reach out to those who can lift us up and reach back when others need a friend. This requires communication!

How can others help us, if we don’t tell them we need a shoulder to lean on? We need to remember that there are times to tell our story. When we share we find encouragement and support and are able to encourage and support others in similar struggles.

How does the world see us in our friendships? Do they see someone who can be counted on and are they there for their friends to support them, or do they see a gossiping woman who tears down others? By God’s grace, I hope we can be the friend to those who have no friends and an encouragement to the down trodden. Let us take our lesson from the starling and spread our hope throughout the world, mimicking Christ and communicating our needs to each other. Let’s show the world what godly friends are like and be the godly friend they need.

Two are better than one because they have a good return for their labor. For if either of them falls, the one will lift up his companion. But woe to the one who falls when there is not another to lift him up.