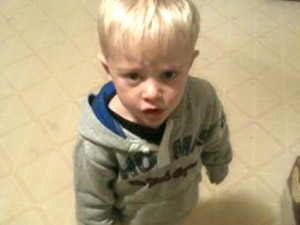 Who knew humility would be served to me by a three foot tall toddler. My first child, Timothy, bright eyed lover of life, has stolen my heart, but has also caused me to eat some extra chocolate (for medicinal purposes). I am the mother who strolled into the grocery store, only to stroll right out, because their child was screaming bloody murder while trying to leap from the cart. I am the mother who had to straight arm my child to try to get him into his car seat long enough to buckle him in. I am the mother who tried to get two kids in the house, while one is screaming “help” loud enough for neighbors 5 blocks away to hear.

Since the age of 6 months I should have known I was in trouble when he refused to allow me to feed him jar foods. His coordination was not there yet, but apparently my E-Trade baby was independent enough to handle it on his own. So let’s just say there were a lot of days the floor looked like we had a food fight. Now, if you are saying, “you’re the mother, just feed him,” this article is not for you. You do not have a strong willed child. We finally compromised by letting him have a spoon in one hand, while refilling the other spoon and then swapping. Hey, if it works, go for it.

Tim really has such a kind, sweet heart; it amazes me when he gets in one of his focused tirades. There are times when he is so sweet to his sister, dad or me that I could just melt. Then, there are other days that I could melt from the glossy stares of onlookers. Their face screams, “She must not be disciplining her child for him to act that way.”

One day, I was talking to a friend, who I know had honest intentions; nonchalantly said, “Parents are praised when their kids are good; we should assume when the kids are bad, it is the parents fault.” I think at that moment I initially told her I didn’t think so. But I don’t even know, because at that moment my fears reached the surface. I had been trying so hard with my son, and I felt at that moment I was being told I was not good enough.

We have tried numerous disciplinary actions. After a few months, we have to switch up the disciplinary action of choice, because he starts to enjoy the discipline, or at least pretend. On countless occasions we have told him no for the same thing 10 times over, but he’ll just happily repeat the same thing. We are currently going with the time out approach to discipline. Every 2 minutes we see if he has corrected his action. Like the Cheezit commercials we check to see if he’s ready yet. Lets just say, the other day it took 45 minutes to get him to eat two bites of spaghetti for dinner. Mind you, he used to love spaghetti, but that’s the point with strong willed kids, they are just always testing boundaries, holding off until you break. His stamina is amazing.

Transitions can be hard

Transitions can be very hard. He will dilly-dally until you pick him up and remove him from a situation, which undoubtedly will upset him and lead to a fun bout of kicking and screaming. Yesterday, I was pretty sure he yelled help, as I tried to guide him to the door, while holding his sister. Who was he calling help to? I guess anyone who would listen.

There is light at the end of the tunnel

Now I don’t want to completely throw Timmy under the bus. His attitude is improving, and that allows for his infectious personality to really shine. But there are days that he is so focused on his game plan, so determined to win out, that it can be very defeating as a parent. I just wanted to share my story so other mothers know they are not alone.

So what do we do? When all the handbooks tell us if we discipline a certain way, we will have a new kid before we know it, and yet some of us are left stranded, feeling helpless, as the temper tantrums still come.

Some things that help most of the time

These are just some of the things that I have found work with my strong willed child most of the time. There will be those days that nothing works, but stay encouraged. Continue to love on them, focus on their strengths, and make the most of every moment. They are God’s personalized gift and responsibility to you. Not only were they handpicked for you, you were handpicked for them!

I praise You because I am fearfully and wonderfully made.

Update: My son is now 7 years old! If you are interested on an update on how he is doing I would love to share Signs of a Leader-My Strong-willed Child part 2